So, in one of my test worlds, I accidentally let a few test norns run around overnight, and now there’s 62 norns and 66 eggs. Of course, as soon as a creature dies, and an egg hatches, someone immediately breeds again to fill the spot.

As a sidenote, one weird thing I’ve run into in running dstation-2020 is that even when I start an undocked world, it still seems to inject all the C3 cosfiles anyway. It isn’t “docked”, that is, there’s no door between the two ships, but the C3 metarooms and all their scripts are still very much there. I wouldn’t ever find them, but when grendels and ettin eggs hatch in those rooms, clicking the birth notifications takes me over to them. I should investigate why this happens, eventually, but I feel like this may have been a problem even in vanilla lc2e, from my very vague memories.

Anyway, for whatever reason it’s always been very hard for me to close and delete a world full of creatures, or delete them all with a CAOS command without triggering the death script first. I could just euthanize them all, but I wanted to run a random experiment instead.

I dropped the whole population into the desert, and then used CAOS to remove all food, fruit, seeds, plants, flowers, leaves, and vendors from the world.

I know there are are least a few sources of food still in the world-- those that are spawned by a script rather than an interact-able agent. I don’t even know off the top of my head what those sources are. But I’ll leave it up to my creatures-- all around generation 10-13 at this point-- to find them. Meanwhile, maybe they’ll be a little less…. prolific. We’ll find out. 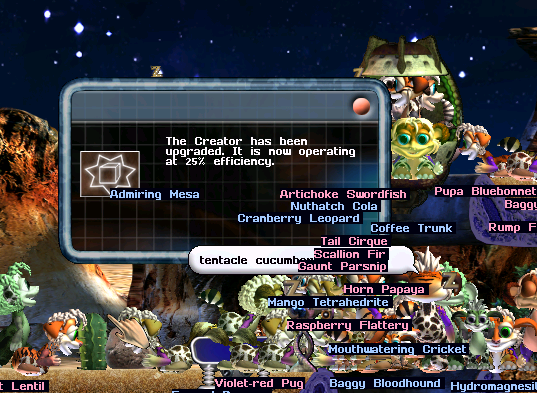 Oh, um. Thanks, I guess. Normally there’s a DS script that runs and activates all these as soon as you dock, but there’s something a little wonky about what lc2e is doing here.

I started a spreadsheet of small CAOS scripts that I write for specific purposes. I’m not sure why I didn’t do this a lot time ago-- my useful scripts are instead just scattered randomly in a variety of note files in badly organized folders across several drives and drive backups. Maybe this will finally, eventually, become The Once Place I Keep Everything. (I have said this every single time I’ve tried a new system of organizing things, so I’m not really holding my breath).

(As a sidenote, I’ll probably update that spreadsheet as I add to it, so if for some reason you’re reading this blog chronologically, many years from now, that document may contain spoilers…? Additionally, as it is a personal document, the scripts were written quickly and messily for personal use: they not optimized for efficiency, and have not been rigorously tested in every possible situation, so use them at your own risk). 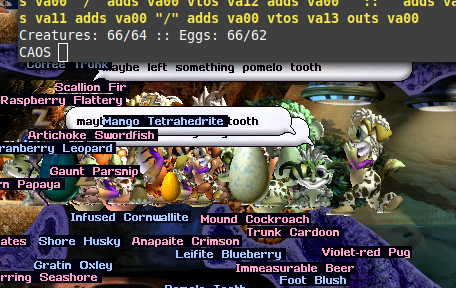 Anyway, the creatures are showing no sign of leaving or … avoiding breeding anytime soon.

These are standard vanilla creatures, not even CFEs, so chances are high that they just might never need to eat again. I know at some point I did research on how long it takes a creature to starve, but I have no idea where I documented it. The answer though, from my memory, is an extremely long time. Even fresh out of the egg, it takes a vanilla creature around half an hour without food to starve to death. As long as a creature finds some kind of food before then, it will survive to breeding age, and of course, once it lays an egg, the population will continue no matter what. Vanilla creatures really need shockingly little food to carry on, and yet they ravenously devour so much of it. 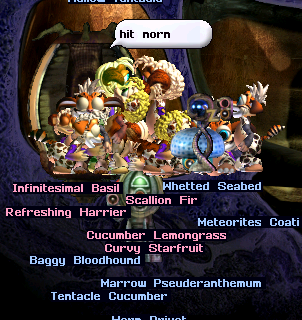 The vast majority of the norns just want to keep going up and down the desert lift, but it looks like a few of them moved to the jungle lift. I see one of them has found an aquamites maker. Can norns eat aquamites? I don’t even remember.

Well, it looks like some of them are starting to die off, but I’m not sure exactly why. 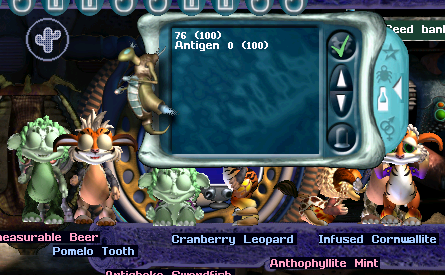 A few of them have some antigen 0 in there, but not many. A lot of them... decided taking a nap in the pond was the best course of action.

I’m half tempted to dig up the Fainting Stars I was working on and inject those-- because they output some biochemistry info about why exactly a creature is falling over. I suppose I could also hunt down and inject any number of health monitor agents. I’m a little spoiled by having the biochemistry set available in windows. 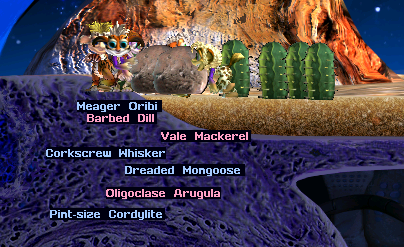 Finally-- the last egg just hatched from the cluster that I first moved into the desert. It’s kind of cute how they all just sort of huddle in the corner near the rocks.

Heavens, the deaths just keep coming though. I know there’s a few apples spawning in the norn meso, but is anyone going to find them before the entire population starves? 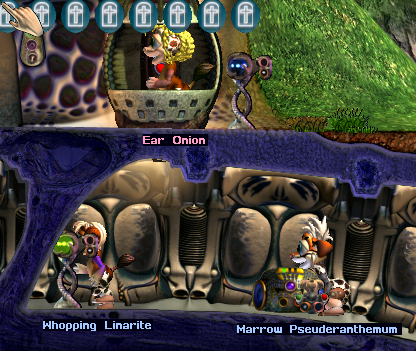 Well, it looks like a few creatures have made it there, but they don’t seem too concerned about even finding food. They’re just sort of wandering aimlessly and mumbling about eating the elevator. 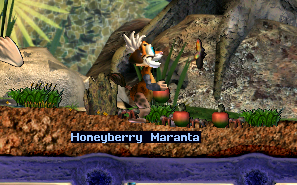 Okay, we have one. One. Maybe this isn’t totally hopeless after all.

It occurs to me that I probably should have thrown in a script to nudge them out of EE syndrome. No doubt that’s a factor in this clustering around elevators and starving instead of seeking out the food that should be well within smell-range.

Okay, you know what. This population has dropped down to 10. I’m gonna cut the survivors a break and drop them in front of the apples.

The native grendels and ettins immediately started feasting. The norns, meanwhile, seemed less interested. I guess this was a line of norns born and bred in the DS meso, with food sources on every platform. They haven’t faced a task like this in generations.

With only one female norn left in the bunch, I think I can pretty much call this a failed experiment. “Ear Onion” is two and a half hours old and but has never had a child. I feel that it’s unlikely she’s going to start now.

I just watched a norn and a grendel fight over a single apple. They kept taking turns grabbing it from each other until the grendel finally ate it. The norn then just immediately took a nap. I feel you, friend.

The five remaining norns. Potato Neck died of starvation, then Cornetite was beaten to death by a grendel. 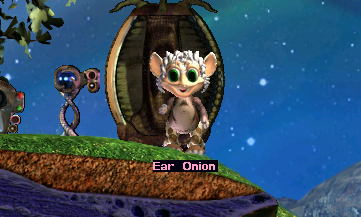 I kept an eye on Ear Onion as she aged. She stayed in the vicinity of the apples and dutifully made her rounds each time they spawned to eat them, then wandered off to play on the elevator or smack some gadgets until the next crop grew in. The other two wandered off into corners and stared at nothing until they starved.

Ear Onion, it turns out, is also very territorial. An ettin came into her apple-patch, and Ear immediately started slapping her until she ran, terrified, towards the pond.

The ettin was trapped between Ear and the water. With nowhere to go, the ettin took her chances and tried to run past the vicious norn. 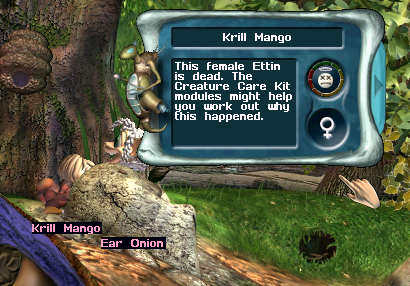 That, it turned out, was deadly. 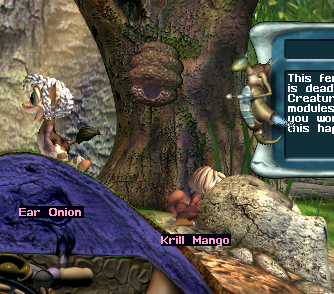 But Ear seemed quite pleased with herself, and strutted off to eat a freshly fallen apple.

Several days (in norn time) later, a grendel showed up to challenge her. Ear wasted no time beating him to the edge of the pond, but then he turned and started fighting back. 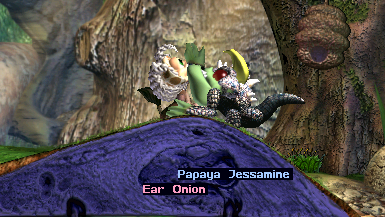 For a moment he turned his back, and she got a few more slaps in herself. It looked like she was getting the edge, but then he turned around and took her out with two final punches. 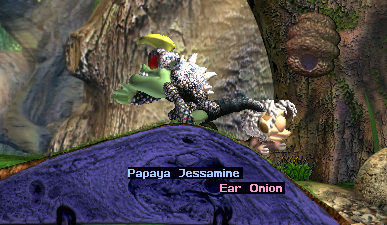 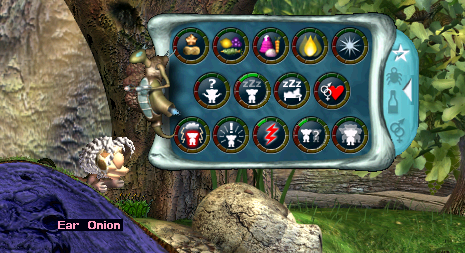 She died without a trace of fear in her, and only a slight tinge of loneliness.

A sad ending, but overall..wow. What an incredible little creature. To not only survive severe food scarcity, but to adapt to her environment and then fearlessly defend it. It’s amazing to see her emerge from the same batch of creatures who, when faced with difficulty, mostly stood around or crawled into corners and starved. I am reminded that this is what I really love most about these games. Even with the most predictable vanilla norns, even while running a failed experiment tripped up by the game’s own bugs, I got to watch these engaging and completely unpredictable events unfold, moment by moment.

The fact that I’ve played it and tinkered with this game for so long theoretically means there should be very little that shocks me anymore, but the infinite behavioral possibilities of these creatures continues to find ways to get to me. I’ll never stop loving it.

I did, of course, save her genome file. I might comb through it someday but, interest reignited, there’s so much else I want to do.