So when we last left off, I was trying to fix a bashfile.

Someone asked me why I was going through all this trouble instead of just using the in-game ject command. A fair question. For one, ject only works with cosfiles that exist already in the bootstrap folder, and I like to keep my projects in their own folders outside of the bootstrap. For another, I could use the excuse to get a little more comfortable with bash, or just... literally anything other than CAOS.

Anyway, the thing that’s tripping me up right now is trying to wrap my head around how to check bitwise values so that I can use the same parameters as the caos-ject command does. I always look back with some endearment towards my past self at my favorite post I ever wrote that no one ever read, in which an 8-years younger me did her best to figure out how bitmasks worked without having a clue what they actually were.

Even now, knowing there’s a term for it, I still can’t easily wrap my head around it. I can understand the logic with enough time, but those neurons are not well-myelinated, and I’m not totally sure they’ll ever be. Meanwhile, it’s a little hilarious that I’m searching around trying to find a bash equivalent to ANDV. I’m not sure I can remember another time when I was trying to find a real-world equivalent to a CAOS command. It’s always the other way around.

Additionally, bash syntax hasn’t clicked with me at all yet. Sometimes spaces matter a lot. Sometimes a line with a space and a line without a space mean completely different things. Sometimes “=” and “==” do the exact same thing. Because bash is basically just a linking together of thousands of little programs, there’s almost no standardization as far as I can tell. But after over an hour of fiddling and searching and trial and error, I managed something that was… at least functioning: 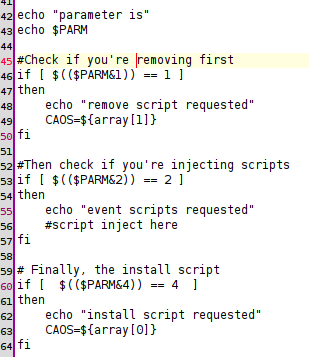 Now to finish splitting up those event scripts and figure out everything else.