So, I forget if I’ve mentioned this, but a weird thing I’ve run into with LC2E is that even when you choose to create an undocked world, the C3 bootstrap scripts get injected anyway. If not for following the grendel-ettin birth events, you would never get access to the metarooms, because the door to the C3 ship doesn’t get injected, but it’s all very much there. This is a source of frustration for me-- in part because I’d rather not have unnecessary stuff eating resources, but also because I’m feeling nostalgic and want to inject some old metarooms that overlap with C3 rooms.

I am using the dstation-2020 script to build my game but I remember this being an issue when I was using TransientLC2E, so I was inclined to think it’s a weird LC2E specific thing.

But I started by poking around in the machine.cfg file and found out-- accidentally-- that removing the "Auxiliary 2 Bootstrap Directory" line (which points to ./mods/Bootstrap/) makes the game behave as it should-- only injecting the C3 bootstrap in a docked world. Of course, this also means the game can’t access the mods bootstrap, which is a shame since… you know.. I use that bootstrap.

But it looks like for some reason there’s a symlink in that folder to the C3 bootstrap, which would explain a lot of things. And sure enough, deleting that seemed to solve my woes. I’m not sure why these symlinks are here at all, but I didn’t write the script, so maybe there’s a reason that will become apparent later.

I’m noting the line in the dstation-2020 script that makes this link here, just for future reference. If, as time goes by, there are no ill consequences whatsoever for deleting this symlink, I may just delete this line from the script for future installs. I guess we’ll see how things go.

So far, I am getting an increase in errors like this: 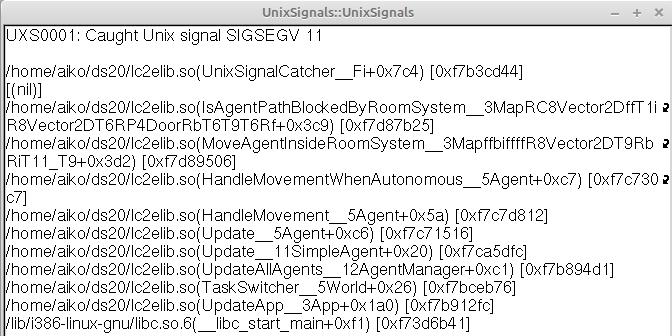 But I feel like I can safely assume these are problems with the old metarooms I injected, rather than issues with deleting the symlink.

(These are particularly obnoxious errors though, because for some reason not only do they hard-crash the game, on LMDE they also seem to crash my entire login session, closing everything I have and kicking me back to the login screen, where I then have to start over opening all my applications and setting everything back up.)