Now that I’ve gotten all my CCSF stuff in and I don’t have to worry too much about spoilers, I can write freely again. I did feel a little weird about not writing about the stuff I was developing, considering that was half the point of the putting these notes here. I don’t know why I had it in my head that the CCSF stuff had to be a surprise anyway. It feels a little silly in retrospect.

Anyway, I’ve taken a small break from developing to refocus a little on the gameplay itself. After having a very long and lovely conversation with a friend about why I love these games, I’ve decided that it’s about time I start another nurturing world, since that’s usually where my best development inspiration comes from.

Having been out of the genome loop for a while, a lot has been thrown into the mix, but the True Warmblood Creatures seem to be considered pretty standard these days. The list of changes is…. long, so long that I feel like I might be better off combing through the entire genome itself to learn from scratch exactly how these creatures operate. And I might eventually do that, making notes along the way.

But I also know that the complexity and realism of a creature’s genome doesn’t mean a lot if it doesn’t result in a more engaging, interesting, and overall more enjoyable gameplay experience. And of course, everyone’s criteria for what makes a play session enjoyable is going to vary greatly.

After so enthusiastically watching the drama of a surprisingly territorial norn unfold in a world with stock genomes, it’s clear that you don’t need a good genome to have a great experience with this game. But a creature’s genome is, of course, a critical component of it’s behavior, and creature behavior is central to the gameplay experience.

I could sit here analyzing the TWB genomes, making detailed notes, and speculating for pages about whether or not I feel like this will give me a more compelling experience, or I could just… play with them.

I thought about running a split world, with TWBs in one area and CFEs in another, running the groups in identically setup metarooms, or just running them in two separate worlds at the same time, but the more I thought into it, the more I disliked the idea. Because in truth, I don’t want to run a science experiment on something as unscientific as Personal Enjoyment. I don’t feel like I would even be able to enjoy that at all! Half the fun of this game is in how much disbelief you’re willing or able to suspend, which is just about the most impossible thing to intentionally employ, let alone measure. I just want to play the game like I always do, and enjoy it, and learn about the quirks and intricacies of the TWBs along the way.

I’m starting out in a C3 docked world, both to appeal to my own nostalgia and because a more familiar environment will hopefully make it easier to learn the quirks of the new genome. In accordance with my preferences though, I’ve stripped out all the lifts in favor of elevines, removed the grendel and ettin egg layers, and, of course, applied a number of fixes to the C3 ecology and other patches intended to make things TWB friendly.

The patching process… could have been less of a pain. Here is a short QOL wishlist for game patch implementation:

1) I really would prefer not to overwrite any files unless absolutely necessary. It would be nice if patches only included the scripts in your patch that are actually changing anything. There’s a lot of patches out there that are basically just an entire replacement cosfile, when the actual patch only actually changes a script or two in that entire file. A patch cosfile only needs to include the changed scripts! If you include unchanged scripts, and the user injects your cosfile manually, those ‘default’ scripts can unintentionally overwrite and nullify any updated scripts installed by a previous patch. And as long as you name it something that is alphabetically after the file it would otherwise be replacing, (prefacing the filename with z’s is the most common one, or just instruct the user to put the patch cosfile in a different bootstrap folder-- I drop several in one called ‘099 Patches’ just to keep things organized-- it makes no difference) the new scripts will inject after, and therefore overwrite, the old ones. This is just so much easier if I later want to remove the modded script-- I can just delete or move the file without having to replace it from a backup.

2) Having to move or remove base game files in order for a patch to work, most of the time, shouldn’t be necessary. It’s one thing if they’re catalogue files, because those can actually clash, but if you need your user to remove base game bootstrap cosfiles for your patch to work, consider just… putting a remove script for those other cosfiles in your patch’s install script. It saves a lot of headache, makes the process a lot easier to undo, and reduces the likelihood of user error.

It’s just my personal principle to not touch the base game files unless there’s no other way around it. I ended up doing a lot of personal changes/restructures of these patches just to avoid this. But maybe that’s just my personal feelings on the matter. I mean, I’m currently fussing with some bash scripts to symlink assets from separate folders into the base game folders so they don’t even have to intermingle-- that’s how… picky I’m being about this, heh.

Anyway, after finally getting everything set up, I hatched three norns: 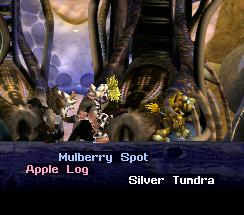 You can barely even see Silver in there, they blend in so well with the surroundings. On second thought, I know nothing about carna norns, I just decided to try them out for the neat sprites. They’re getting very slappy, and I’m already unsure if this was a good idea.

Well,someone had to go into the learning room first-- it may as well be them. 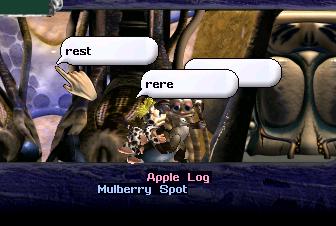 These two are already looking miserable, and it’s stressing me out. I’m not used to creatures looking so upset right out of the shell, so I’m trying to get them to tell me what’s going on. Hard to do without vocabulary, and I’m a little frantic and just spamming ‘teach random’ hoping to get the basics down as quickly as possible. I don’t like to use auto-vocab in my nurturing worlds as a rule, but we’ll see how stressful this gets.

After dropping a little food, Apple perked right up and started playing with the toys. Mulberry continued to sulk, limp around, and complain about being “huhu”. I can only assume that Silver’s smacks were mostly directed at him.

Silver got bored of the learning room, and quickly wandered out, complaining about being hungry for protein. Apple and Silver met again on the carrot patch, where Silver smacked on her again until she left. I guess Silver’s just gonna…. stay off on their own for the most part. 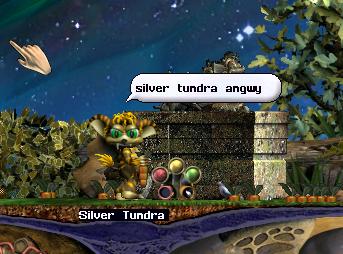 Something’s telling me I really should have read up on the Carna norns before hatching one. Well, I gave them some calm balm and crobsters (the breed name alone makes me assume they prefer meat as a food source?) and that seemed to make them happy.

About half an hour in, and nobody seems to have really traveled much. I guess, why would they, surrounded by everything that they need? Except… company, perhaps. 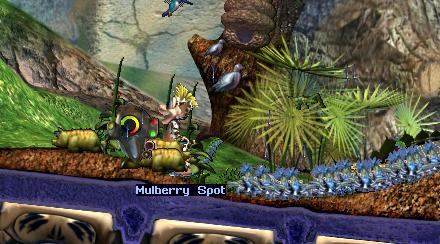 Mulberry mostly seems to just want to hang out in this dip, smacking the medical monitor, swarmed by all the crobsters who have run off the cliff seeking water.

I caught Apple just standing here, staring at me, unblinking, insisting on approaching whatever ‘daa’ is.

For some reason the F1 > left click isn’t working to teach surrounding creatures the name of some things. Not everything, but certain things, like ‘machinery’ and ‘norn’. I’m not sure what of the many, many updates that I installed broke this, but luckily Magic Words Hand Teaching works around it.

Hand Teaching was one of those things that I developed while playing with a nurturing world, wanting a more in-the-field alternative to the learning computer, and it’s still one of my favorite tools to use in nurturing worlds. Something that’s been bobbing around in my head though is the idea of an agent that runs in the background and just kind of casually teaches norns words when they’re not on screen, eventually getting the creature up to a full vocabulary by the time they’re an adult. I feel like this might create a nice balance-- still having hand-teaching being a rewarding experience for the player without becoming too much of a burden as the population grows. 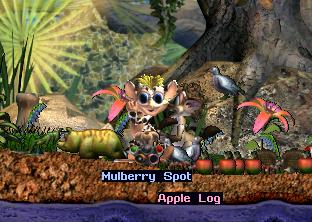 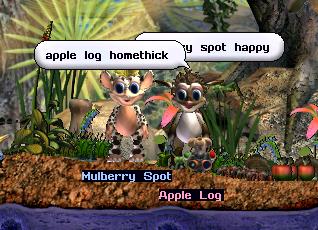 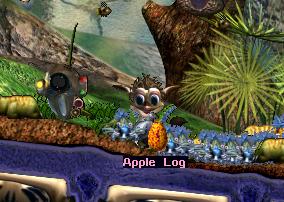 Anyway, after watching everyone mostly just sit around for a while in their own little spots talking about how happy they were, it was nice to see these two reunite, and… almost instantly kisspop.

Apple seemed to make a mad dash for Norn Home at the end of her pregnancy, but only made it as far as Crobster Dip.

Silver’s still hanging out alone on their little hill, but it’s sounding like they might benefit from…. a dip in Crobster dip.

But despite having access to plenty of them up here, and repeatedly generating more, they don’t seem terribly interested in… eating any of them.

After coaxing them to eat a few anyway, they said, “Silver Tundra love hand.” I guess I’m doing something right. 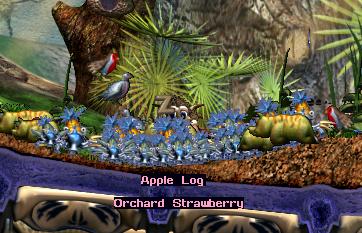 She and her mother immediately got lost in the crobsters. 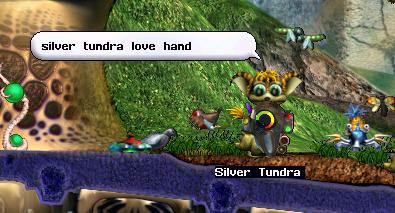 Silver finally came down from their hill! Look at this cutie. I love them so much. 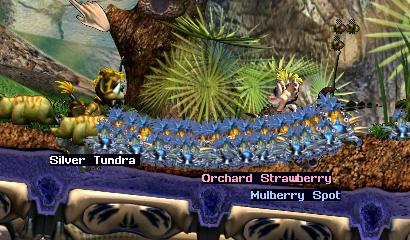 Should.. should I do something about these crobsters? There’s an awful lot of them, and I don’t think TWBs eat as ravenously as older genomes. 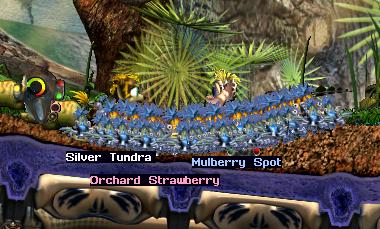 Suddenly they were all tired, took a nap and then woke up exclaiming how happy they were. Do these creatures actually follow some sort of day/night cycle? I’ve noticed they seem to suddenly all get sleepy around the same time, and rather.. suddenly, at that.

Here’s the current breakdown of who likes who!

...oh, apparently Mulberry Spot loves Silver Tundra now. That was quick. It seems he’s forgiven all their slappy habits from their infancy. Apple Log though, it seems, has not. 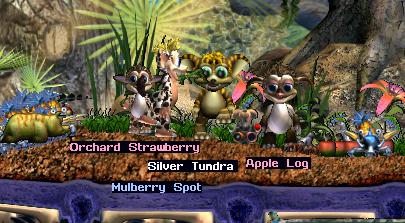 It seems they’re all just happily hanging out together now. I’m hearing a lot of tickles between them. 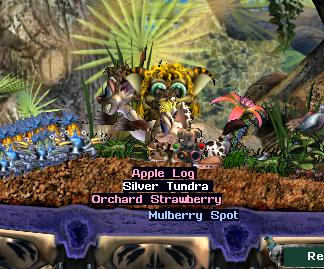 Together, in their little tickle pile, Apple, Silver, and Mulberry aged to adults, all while exclaiming how happy they were.

It’s way too early to say much about the TWBs, but I’m excited to see how things progress!